In this article, Bobby Kittleberger (Editor of Guitar Chalk) is going to walk you through the process of building an authentic-sounding tube amp tone using only the features and tools in Guitar Pro 7.

Once you know how to dial in this sound, you can use it to build and sample different tabs. Bobby will use both screenshots and sound samples to illustrate the process.

While Guitar Pro is – first and foremost – a tool used to build guitar tabs and sheet music, it also has some fairly advanced modeling and playback tools incorporated into the newer versions (primarily 6 and 7). These features don’t make it a recording suite, but they do allow you to mimic and model different tones and sounds that provide context to the music you’re writing with a wide array of guitar and amp sounds.

Let’s first start with a blank project in GP7.

I usually prefer turning off formal notation and using just the tab sheet, which you can do under the MUSICAL NOTATION section in the right sidebar. I’ll also set up a riff to use for sampling the sounds we’re going to work with.

Now, to tweak the sounds for playback, you’ll use the SOUNDS section which is also located on the right sidebar under the TRACK tab. I’ve started the tab with an overdriven electric guitar tone. 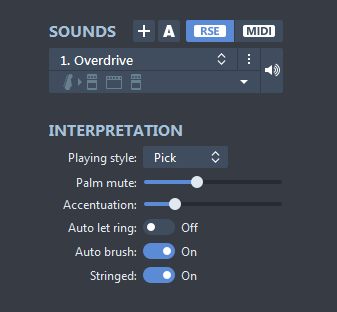 Here’s what our three chords sound like with this default setting:

Not bad, but it doesn’t necessarily sound like a tube amp. The best tube amps are warm and almost have a softer quality to them, which is harder to get from a digital model. Let’s see if we can dial in something with a little more warmth. Click on the SOUNDS drop-down menu and go to Electric Guitars – Clean Guitar – Blues.

You can also re-label the sound setting. I called mine “GP7 Tube Amp.”

Next, click the SOUNDBANK dropdown and go to Electric Guitars – Tele. 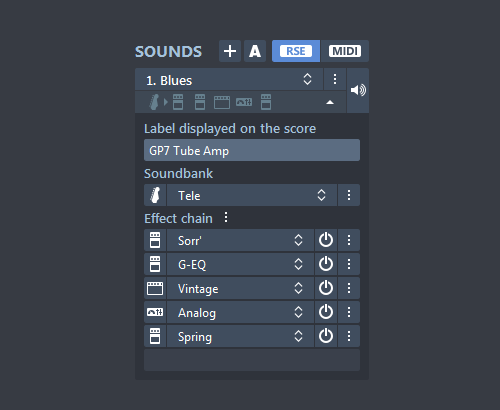 Next, turn off the “Sorr’” compressor by clicking the power icon next to it. 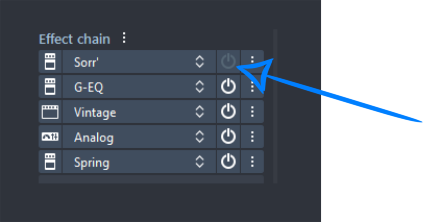 Now, your “guitar amp” is listed in the effects chain as “Vintage.” Click on it and go to Amplifiers – Top-30. 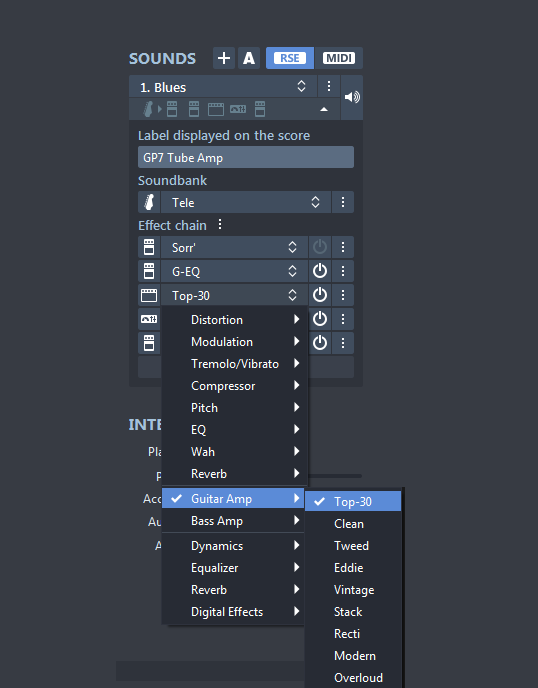 This should bring up the following amp interface. The knobs will all be set to 12 o’clock by default if this is the first time you’ve used this particular amp model. Set them to about where I have them set in this picture:

The tremolo and reverb controls are just for taste, adding a little extra effect so you can set those, however, you’d like. Here’s the audio we have at this point:

Let’s try this same model with some bends and simple lead technique instead of the full chords. Here’s the lead lick I’ll use:

In this audio sample, you can really start to hear the sweetness of the tone come through, which sounds a lot better on the cleaner GP7 amp settings than the dirty, distortion-filled versions.

We can now use the global EQ to tweak things just a little more and refine the sound.

Hit F8 to make sure GP7 is displaying in Global View. At the bottom of the GP7 interface, you should see a section labeled “Tracks.” From there, click the small EQ icon and then toggle the EQ “On.”

From there, click on Presets – Electric Guitar (Clean) – Sweet Clean Rhythm EGT. This will dial all the EQ controls for you. I tweaked them to be a little less bright on the high end, but that’s mostly a matter of preference. This setting seems to do a great job of bringing out the crisp highs and warm lows that you would expect from a tube amp. 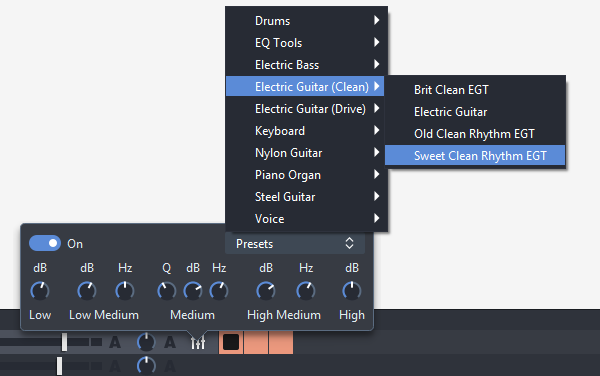 Here’s the final audio file I exported using these settings:

It’s far from perfect, but that’s about as close as I’ve gotten to an authentic tube amp replica from Guitar Pro software, which isn’t bad, considering its primary function has little to do with amp modeling. I’ve found this to be incredibly helpful for modeling the tabs I create and providing some audible examples, especially when I’m writing something educational.

In my opinion, the SOUNDS section that Guitar Pro has incorporated into their software is vastly underused and underrated. It’s a fantastic resource for teachers, students, and even casual users who want to build simple tab sheets.

If you have questions about the tutorial or the Guitar Pro software in general, feel free to leave them in the comments section below. I’ll do my best to answer there.

Bobby graduated from Bridgewater College back in 2008 with a degree in computer science all while having played guitar since his 9th birthday. Since then, he has worked to develop guitar and music-related content with a number of large companies and publications, including Guitar World, Guitar Player, Harmony Central, Paul Reed Smith, and Seymour Duncan.

He also authored the book The Guitar Player’s Plain English Guide to Music Theory. You can hit him up on Twitter.